‘An orchard tells the seasons more frankly than most woods, flaunting its blossom, dropping big fruit, feeding masses of creatures as well as us, demanding attention’ (Common Ground, 2000).

The ‘Common Ground’[1] charity taught us that local distinctiveness is about what place means to people: unless a place has meaning to the people who inhabit and use it, it is unlikely to be cared for.

In September 1991, having moved to Herefordshire to take up a new job, I needed somewhere to live. I trawled the local agents for months and when I dropped by HJ Pugh & Co in Ledbury one balmy spring day in 1992, they suggested I look at a smallholding named after a marl pit at Gregg’s Pit, 400 metres up a track off the B4024 Dymock Road, in the village of Much Marcle.

What I beheld that day was a two acre bramble infested traditional standard orchard and a derelict 18th Century cottage, condemned unfit for human habitation, without mains electricity, water or telephone. It was perfect!

Gregg’s Pit was and remains an idyllic place, surrounded by traditional standard orchards with permanent grassland grazed by Hereford cattle, and perched on a small ‘tump’ with 360-degree views looking east to the Malvern Hills, south to May Hill and west to the Marcle Ridge.

So I became a craft cider and perry maker by virtue of a place that found and took hold of me. Since my partner, Helen Woodman, joined me it’s that sense of place, continuity in a cultural landscape, renewed productivity and the many wildlife benefits which continue to make traditional orchard management both rewarding and life enhancing. 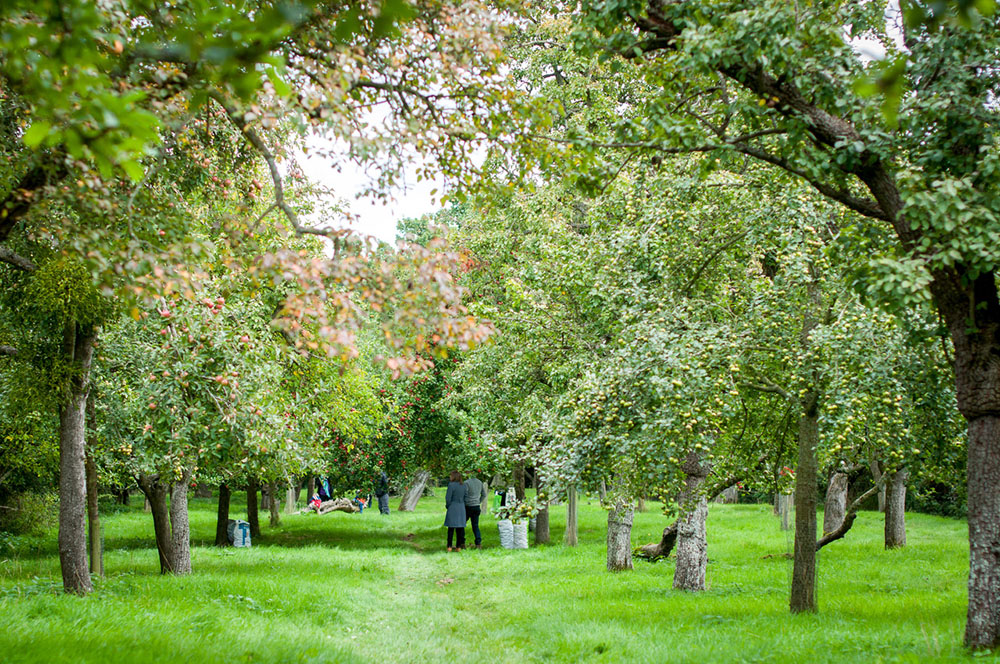 After months of cutting, clearing and burning the waist high nettles, docks and brambles, several rat-infested chicken sheds, piles of scrap metal and empty bottles, it became clear that the orchard trees were in rows. Then with help from the previous owner and local experts, we confirmed identities of more than 30 different varieties of cider apples, perry pears, dessert and culinary fruit among 100 standard trees.

Spring 1993 revealed large patches of wild daffodils and we planted the first new cider apple and perry pear trees to fill gaps, laid hedges and renewed fencing, all enabled by a capital grant from the Countryside Stewardship Scheme. Today, our orchards are fully stocked and young trees planted 25 years ago are coming into their prime with many harvests ahead of them. The standard cider apples will live more than 75 years and perry pears more than 250 years.

We prune young trees to promote new growth, shape and light. No more than 30% of branches of any tree are removed. Mature perry pear trees look after themselves because their branches are brittle, liable to self-prune and dangerous to climb. Some dead and decaying wood is always left in the older trees to provide a succession of habitats for insects, cavity and hole nesting birds like tree creeper, owls and woodpeckers. Patches of south-facing nettles are left to encourage butterflies.

We used pheromone traps for a few years to monitor insect pests like codling moth, apple sawfly and aphids, but stopped when they caught a greedy blue tit. Now we rely on natural predators such as spotted flycatchers[2] and hornets to manage pests. A local beekeeper once offered his hives to help with pollination, but hornets predate bees so the hives had to go. 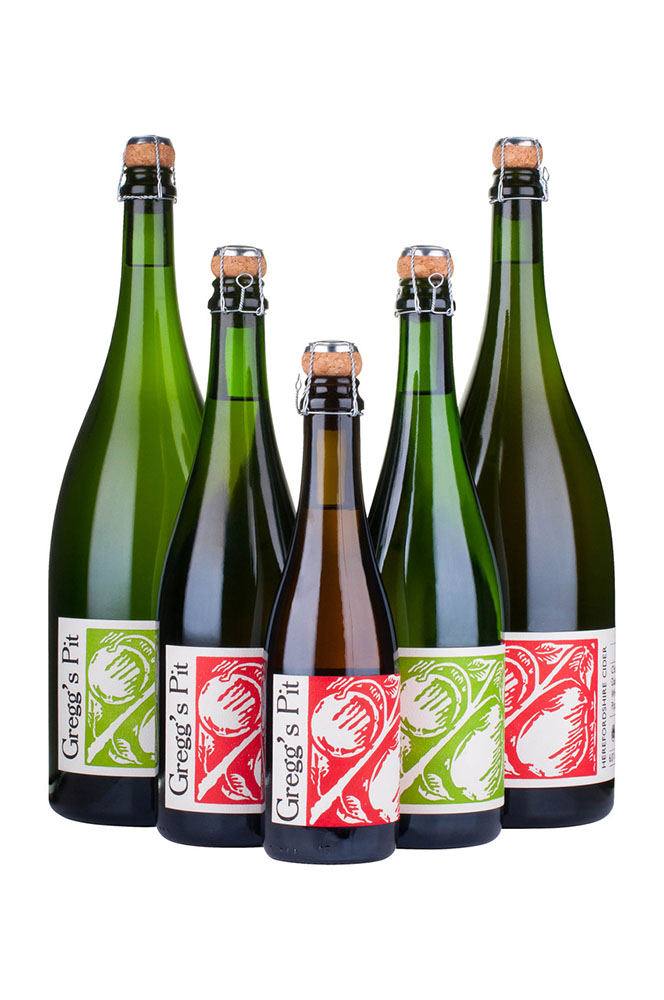 Having restored the orchard, what to do with the fruit? Our first meagre crop was sold to Westons Cider, but by 1994 it was three tonnes and we began ‘share cropping’ with a friend who pressed our fruit in return for 30% of the juice. Our passion for making craft cider and perry has grown into an award winning[3] micro-business producing 6,500 litres a year www.greggs-pit.co.uk.

Although there’s space in a growing market for everyone, when the market turns and there’s a glut of fruit (as in 2019), cider and perry making becomes more difficult unless your products communicate your values and offer a compelling narrative back-story for customers. So we like to celebrate the many points of difference between our craft and industrial products. Not better or worse – that’s for informed customers to decide – just different.

Craft cider and perry makers share a love of locality or place (what the French call ‘terroir’), which provides ideal conditions for growing vintage fruit and makes possible what we do. We have a deep understanding of the concept of ‘terroir’ and how it differentiates producers, vintage fruit varieties and regions.

By contrast, industrially produced cider and perry may be made from any apple/pear, not vintage varieties, and from concentrated juice. It will ferment in just three to six weeks with cultivated yeast, have added sugar/corn syrup to raise alcohol levels, be diluted with water to minimum 35% juice content, be pasteurized, force carbonated rather than naturally sparkling, and many artificial flavourings and colourings are allowed – not all of which have to appear on the label. So why choose from a few big name industrial brands when you can explore the rich and varied output of hundreds of craft makers?

In summary, it’s all about high value vs high volume. We work hard to make our customers aware that premium quality craft cider and perry is made differently from commercial products, and the time and passion that goes into its production is the reason for its robust price. 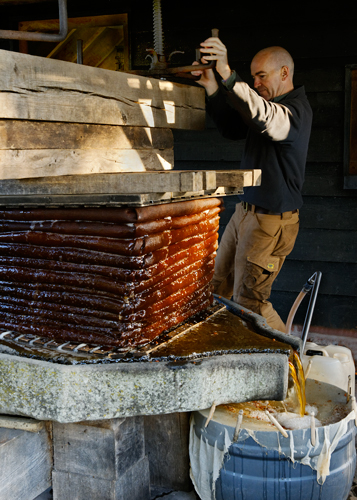 The future and climate change

Over 25 years of making craft cider and perry, we have kept records of harvest dates, original gravity and acidity at pressing which show:

What does this all mean? It seems there may be parallels with what wine makers are recording, and climate change is probably the common cause[6].

Cider apples and perry pears, like grapes, are responsive to their local environment (i.e. terroir) with seasonal variation in yield. The interaction between geography, climate, soil and variety affects the suitability of specific varieties to a particular region[7], parish or orchard, as well as the style and quality of the finished product. Climate change, especially gradual temperature rise, may threaten the balance of this interaction.

Prolonged high temperature is known to have a negative impact on vintage fruit and product quality because it affects development of natural fruit sugar, acidity and phenolic compounds (e.g. tannin) which give colour, aroma, bitterness, astringency and anti-oxidant capacity. The unpredictable nature of climate change may also bring forward the date of bud burst and increase risks of late frosts and hail storms, which lower yield and impact fruit quality.

These climate change effects will lead to a likely shift in suitable growing conditions. It has been predicted that the northern boundary of European viticulture will shift north 20 to 60 kilometres (12 to 37 miles) per decade between 2020 and 2050. This could have positive and negative effects, making it possible to grow new varieties in different regions but also loss of suitable terroir for other varieties, and may adversely affect product quality and quantity. So in 25-50 years time, we may be looking to plant cider apples and perry pears inland from the Wirral or Solway estuaries to replicate the growing conditions we now enjoy around the Severn Estuary.

Enjoy Herefordshire’s rich tradition of craft cider and perry while you can!

Selvey, C. (2015-2017). Doctoral Research with the aim to ‘Quantify the biological pest control benefits or dis-benefits that exist if natural habitat is integrated into apple orchards’. University College London.

[1] Common Ground was founded in 1983 by Sue Clifford, Angela King and Roger Deakin, in the belief that our relationships with nature and the land are fundamental to our wellbeing.

[2] Spotted flycatcher is a sub-Saharan summer migrant now extinct as a breeding species in much of southern England, and has suffered 90% decline on its British breeding grounds since 1970s. Nothing has changed in its ecology except food availability – its insect prey.

[4] What is a perry pear? Wild seedling pears, from which named perry pear varieties derive, have been highly valued since classical times – Pliny the Elder (23-79AD) gives the earliest reference to use of pears for making a fermented drink. The UK distribution of perry pears is still almost totally confined to Gloucestershire, Herefordshire and Worcestershire, where for more than 400 years perry making has played an important part in the rural economy.

[5] Perry pears contain varying amounts of a natural sugar called sorbitol which does not ferment to alcohol and can have a powerful laxative action on some people – this probably gave rise to the traditional saying “Perry goes down like velvet, round like thunder and out like lightning”.

[7] Perry pears have long been associated with the counties either side of the Severn Estuary ‘in sight of May Hill’ in the West Midlands and South East Regions of England, sheltered by the ‘rain shadow’ of the Black Mountains/Brecon Beacons in Wales and enjoying the benefits of a warm, sunny, ‘oceanic’ climate, and red clay soils with a streak of lime rich grey marl running through which provides the right soil.