Back To The Future

Farming with horses, wheat, oats, Jersey flour for Jersey bread… no, not a description of Jersey farming in the past, but of farming at Le Tacheron Farm in the Parish of Trinity, Jersey in 2020. ALASDAIR CROSBY talked to cousins John and Charles Le Maistre.

(Adapted from an article in RURAL magazine, Summer issue, 2020).

THE word ‘Le Tacheron’ is Jèrriais (Jersey’s traditional French language) for ‘the team’ – a group of three workers, usually working together in the Island’s potato fields. The team at Le Tacheron Farm is also a team: three family members united by a belief not just in traditional farming, but in its applicability to farming in the 21st Century.

The three – John Le Maistre and his cousins, the twins Charles and Alan Le Maistre – are growing wheat – a traditional variety grown in Jersey in the 19th Century – and Maris Widgeon, another heritage variety.  Other grains they are growing are einkorn and spelt – originally harvested in prehistory by the earliest farmers.

Also in their range of crops are old-fashioned ‘naked oats’ (oats without hulls), which can be rolled or ground into flour with minimal processing, yielding a nutritious and flavourful food with a variety of uses…. including porridge. In 2021 they intend to  produce the first Jersey porridge oats for very many years – and oat flour as well.

They cultivate their crops, whenever possible, by horse-power. They own two shire horses, two miniature Shetlands and a Normandy cob. The bigger of the two shires, Big Ben, stands at 19.1 hands – about as big as you can get. Their mechanical equipment consists of lightweight vintage machinery, including a ground driven reaper binder and a couple of classic tractors.

They own an old-fashioned oak and granite mill imported from Austria, and this year they started milling for the first time to sell to the general public. That just happened to coincide with the arrival of coronavirus and an upsurge in domestic bread-making. Now they are milling once or twice a week, making mainly wholegrain and bread-making flours, a hard white flour and also a soft white flour. They use the spelt for wholegrain and white flour.

If they had to name a mentor, it would probably be the eminent 19th Century Jerseyman, Sir John Le Couteur, who undertook a sustained scientific study of wheat and produced several books on agriculture, among them: ‘On the Varieties, Properties, and Classification of Wheat’ (1836).

Charles said: ‘We are growing Le Couteur’s grain – we had it released from a seed bank in the UK, the John Innes Centre. We are trying to make all our growing methods replicate what was done at that time.  We followed Le Couteur’s books, planting on the same dates that he did.’

Their dream is to have their own “landrace” [local traditional variety] including Le Couteur’s wheat combined with the Maris Widgeon variety.

He continued: ‘No one has grown the old Jersey grain since the 1830s, so we thought that if we ended up growing them the old-fashioned way in Jersey, with horses, we’d be doing something pretty special. Le Couteur’s work inspired us to try to combine sustainable agriculture with preserving Jersey historic and traditional methods of farming. We realised that pretty much all the features around the Island’s old farm buildings were designed with horses in mind – and in particular growing wheat. Everyone was growing their own wheat and straw back then. That’s how we stumbled across the idea of growing some Jersey grains in the old-fashioned method.’

Oats and wheat were commonly grown in the Island until after the Occupation decade so as to feed working horses.

So not an everyday Jersey farming story. Why did they choose to farm in this way?

Why farming in this way?

John said that to an extent it was a lifestyle choice, but added: ‘Everyone queried what we were doing! When we planted wheat, the general consensus was that unless you were planting thousands of acres of wheat in East Anglia or America you couldn’t make it work financially and it wasn’t worthwhile. They thought we were mad! But when people started to worry about securing local food production – a worry exacerbated by the coronavirus emergency – and what Jersey could produce… and when they realised we were making Jersey flour – there was a complete reversal!

‘With us, this has been a hobby that’s grown into a farm. We’ve done it, because we love it, and it couldn’t be further from any commercial incentive, because we have not been doing it for money – it’s just something we believe in. A lot of people are behind us, and they support us because they believe in the message. Farming is in your blood – certainly in our blood. It is a lifestyle, not a commercial occupation.’

Charles continued: ‘We grew up with our grand-father, Charles Allan Le Maistre, who farmed in the Parish of Grouville. He loved working with horses – as we do. Now we plough and do more with horses than we’ve ever done before. If we didn’t have a farm to justify working our horse, our past experience would all have dissipated by now.

‘There are distinct advantages to working with horses. Our grandfather used to grow outside tomatoes. He had a walk-behind rotavator. He said that it was quicker with a horse to weed the tomatoes – the horses actually go at quite a pace. If you walk behind them, it’s quite tiring keeping up – but they slow down as the day goes on.

‘We’ve tailored our farming to using horses, so we’re not relying completely on using manual labour and we are being as low impact as we can. Horses make a massive difference. The first year we plough, we have to plough with a tractor, before we can start working with a horse, because the land has been compacted so much over the years. To have an animal that manages its own food source and fertilises the ground – it means you can be pretty self-reliant.

‘Realistically, 15-20% of our farming is with horses. We want to increase that as much as we possibly can. We make up the balance with vintage machinery and low-impact, light-weight tractors. The dream would be to have pretty much a working horse farm. It’s perfectly achievable. Just a balance of generating enough income to justify the cost.

‘A lot of what we do is about preserving the past and also trying to farm in a way that we believe is sustainable and right.’

John added: ‘We had a cracking upbringing on the family farm. We have got kids, and to bring them up in the same way is really good for them. We grew up surrounded by animals and fields, imbued with countryside values. And for our children to experience who we are, they need to experience us doing what we love. They are beginning to help us on the farm. We hope it will shape their character in the same way that it has shaped ours.’

For Le Tacheron, the coronavirus cloud has had a silver lining, since so many households have been experimenting with home baking during lockdown and Le Tacheron has been running an on-line baking competition called ‘Knead to Stay at Home.’

‘Without coronavirus it would have been a struggle to get going this year,’ Charles said. ‘We’ve been pouring money into the farm. But it has had to find its legs to pick up some momentum, so we could justify it. The nice thing is that people are really enjoying our flour, so they are not just buying it for the sake of it. It turns out that it’s good flour as well!’

John continued: ‘We knew that we had really good heritage grain, and that milling it with a granite mill is far different from modern stainless steel mills. It is the quality of the flour that counts – that’s not just a marketing slogan.’

Le Tacheron is not centred on some old Jersey farmhouse, but there are four fields above Bouley Bay on the Island’s north coast, within walking distance from the two homes of John and Charles. Alan also lives nearby. In addition there are four more fields in the vicinity; the land area totals 100 vergées (44½ acres). They have a small beef herd, goats and sheep and a few vegetable crops, such as ‘gourmet garlic’. They leave ten per cent of their land ‘for nature’.

Hops grow in the hedges and they grow barley, suggesting, perhaps, a future Jersey beer from Jersey hops. They make cider every year… bread, cider and beer – a good definition for ‘self-sustainability’.

John, who is the one of the trio who spends most time on the farm (the others have other jobs to support them), said: ‘The more you get involved with farming, the more you realise everything is about the weather and the timing of the harvest.

‘Our situation is still pretty fragile, but I think we’re just about getting there! Costs were astronomical to start with but we have had a lot of support from family and friends – without their support we couldn’t have done it.

‘We feel we are part of a backwards revolution – back to the future.’ 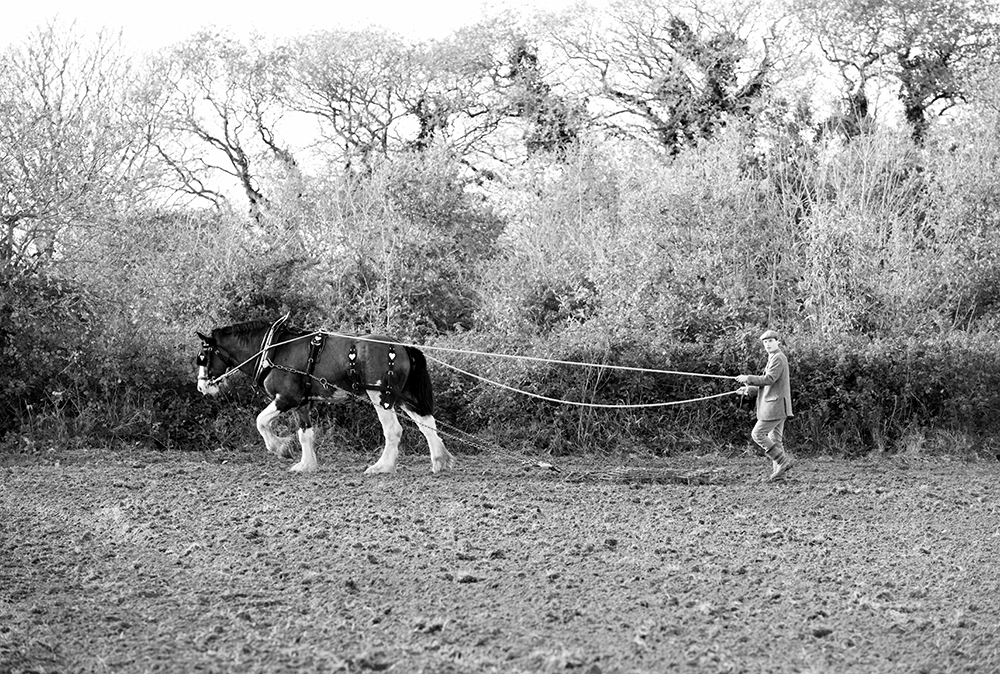 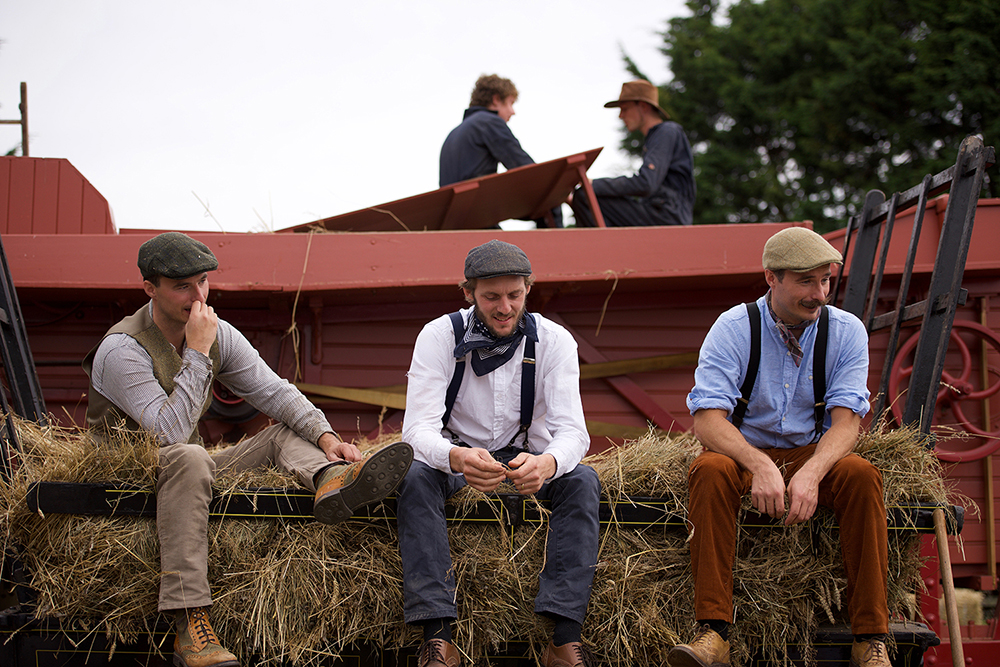 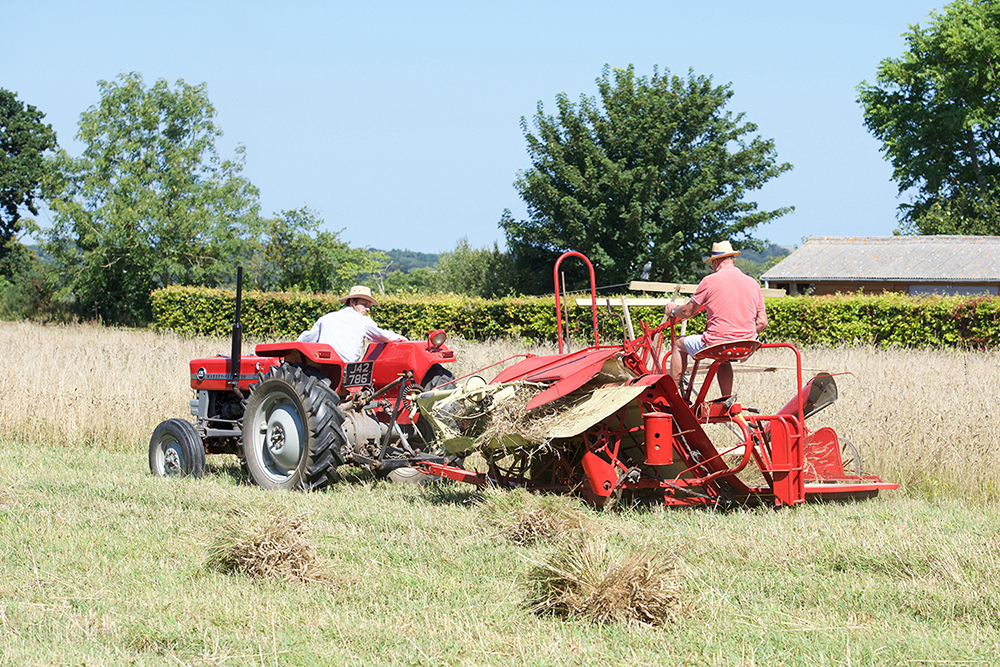 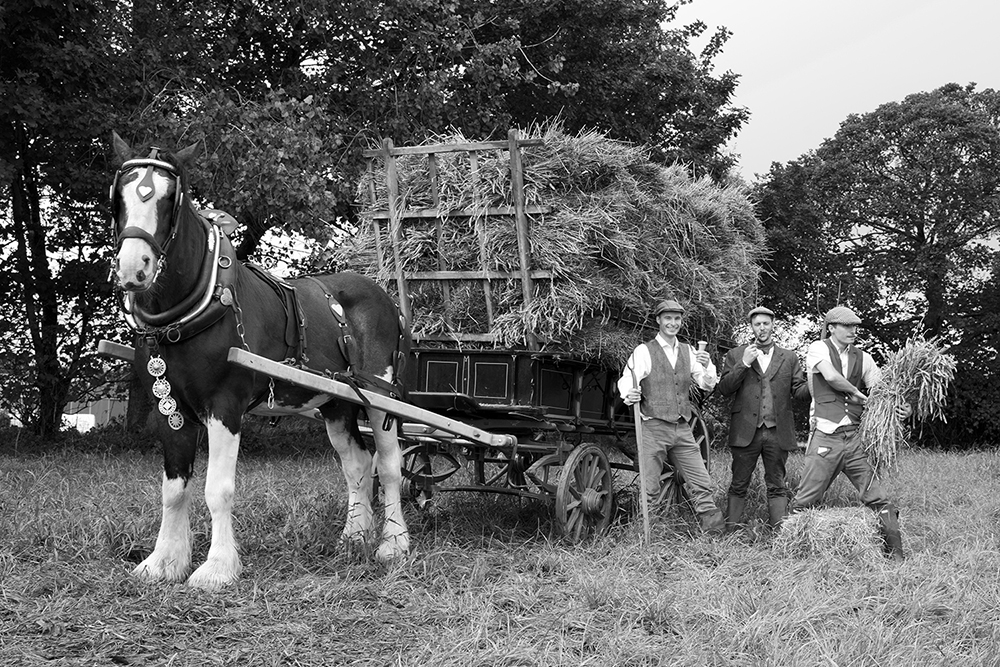 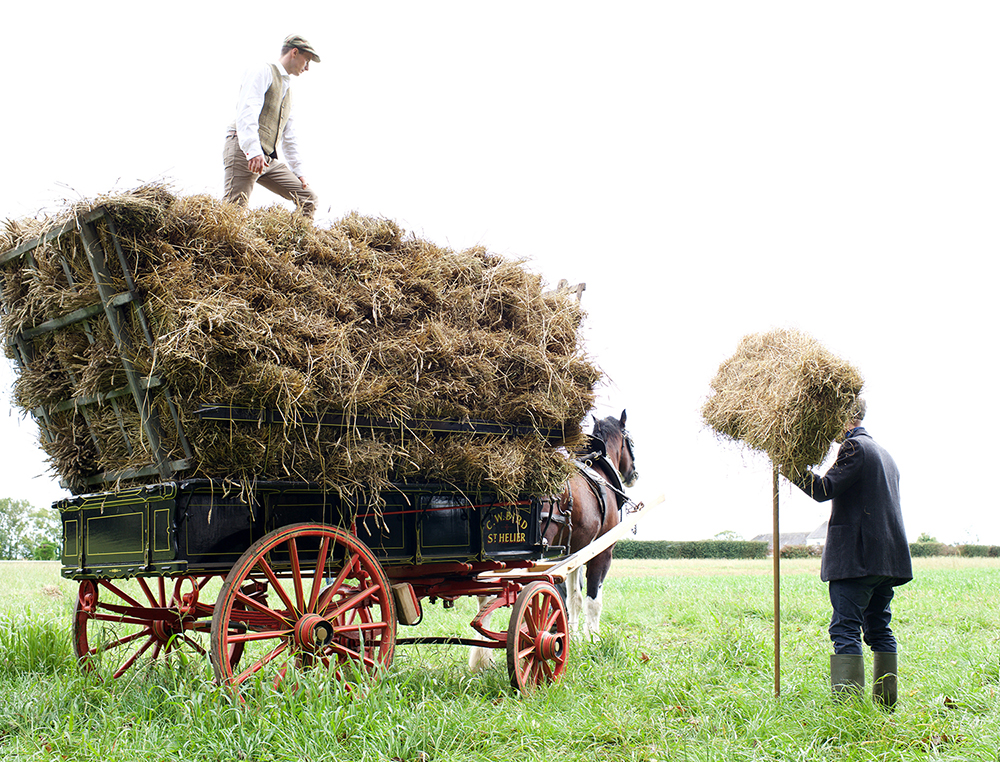