It has not been easy to write this chapter as my whole life has been incredibly rural. On the sunny May morning when I was born in 1943 I imagine my mother could hear the cuckoo and the skylark from her bedroom. Of course even from day one I was trouble, I tried to come into the world sideways and I have been trying to do everything my way ever since.

Whether coming in against the flow had any lasting affects I have no idea, although I have had asthma all my life. This might have been caused by all the pulling, pushing and un-wedging, I do not know; all I do know is that it did not prevent me from loving sport, or from climbing Mount Kilimanjaro three times. It didn’t stop me from playing football with chemical help until I was forty-eight, and I still have not retired from cricket, I just don’t have time to play. Even the ascent of Kilimanjaro was chemically assisted with the pill or drug “Diamox”; a drug usually taken by women periodically. It is a diuretic and gets rid of surplus bodily fluids; while going up mountains this helps to prevent altitude sickness.

I have been pulled and pushed ever since as I have travelled against the flow in an eventful life and I am travelling against the flow now – for what is ‘dinner’, I haven’t been told. Although my 76 years have seen great changes and brought suburban living to and around the village where I still live – as a child the village was considered to be a real part of rural England, deep country. ‘Dinner’ was the main meal of the day anywhere between twelve – mid-day and half past one. For me that is still ‘Dinner Time’ – forget the posh ‘lunch’ of the ‘blow-ins’; and their ‘dinner’ is my ‘supper’; their ‘casserole’ is my ‘stew’. My ‘lunch’ at the village school was ‘play-time’ at mid-morning – the highlight of which was a third-of-a-pint bottle of milk.

Oh – and I have already forgotten to say, we were extremely ‘under-privileged’ and ‘disadvantaged’ – the ‘lavatory’, not ‘toilet;’ was a ‘bucket lavatory’ across a small yard and the water for the semi-detached farm-worker’s house came from a water-pump operated by hand in the garden. Piped water and taps arrived in 1947, which also celebrated the arrival of flush toilets.

But what do I remember about ‘dinner’ in those dim and distant days. I remember my father not only working on his father’s farm, but also overseeing our very productive garden. (Grand-father was a successful butcher who had left school at 11 or 12 to become ‘a shepherd boy’ – to watch-over sheep. It was interrupted by an apprenticeship in a butcher’s shop – and his own successful business followed. Father turned his back on butchery and became a farmer, on the small farm – of about 120 acres.

Father loved his vegetable garden and so ‘dinner’ was a yearlong celebration of the seasons and home grown food, seasoned in the garden with a bit of ‘cow muck’ or ‘hen muck’. Beautiful potatoes, cabbages, turnips (does anybody eat turnips anymore in the middle class, mange-tout munching parts of England? I doubt it – but they are delicious), lettuces, tomatoes – basic English food – tasty, healthy, fantastic. I will mention swedes too – mother used to mash swede up with milk, flour and butter – delicious, but all the swedes Father grew in the garden were very small and puny. Instead, when he planted Mangold wurzels in a field for the cows, he would throw a handful of swede seed in with the mangold seeds and as the mangolds were harvested for the cows every so often there would be a fine large swede – job done. Very strange;  why?  And how?

The garden was pigeon and rabbit free, because he shot them if they ventured in and we ate them – that was food for simply the price of a cartridge. My mother would make both pigeon pie and rabbit pie with short-crust pastry – delicious and the kitchen had the smells of the seasons – asparagus, Brussel sprouts, runner beans, new potatoes, baked potatoes, apple-turnover, chutney, jam, new baked bread and then family handed-down specials – plum-treacle, light pudding, apple-turnover; enough of this – I am making my mouth water as I type and this is not a cookery book.

Fresh eggs were plentiful from free-range hens – the eggs had brown shells and were delicious. As I walked, and later cycled to school many of the gardens in the High Street also had back yard hens. As a result crows, magpies, jays and sparrowhawks were rarities – as owners of hens declared war on all stealers of eggs and chicks. Full grown hens (they are not ‘chickens’ as in today’s warped suburban language) were protected from foxes too – guns, traps, snares and poison made magpies and crows extremely scarce and I didn’t see my first fox until I was well into my teens.

When assorted ‘birders’ and ‘experts’ talk about how once common wildlife populations have plummeted – they have forgotten that during much of my early life most of the now common predators were controlled – not by gamekeepers, but by ordinary householders with hens. The generational memory loss is known as ’shifting baseline syndrome’; it distorts both the past and present.

Changes in the countryside

My first farming memory was of my father milking by hand while sitting astride a three-legged stool. The Countryside Restoration Trust – read about this later – now milks using robots – astonishing. In the harvest field, a horse drawn ‘binder’ cut the corn. The horse soon to be replaced by a tractor – then the binder by a combine harvester and a chain of ‘progress’  led to fertilisers, drainage, new technology, biology and botany. Economics changed too – most of the farms lost their dairy herds, including us. With the advent of supermarkets, ordinary people no longer needed their own eggs from backyard hens – they could buy eggs cheaper from the supermarket. Some people thought that was good. Farmers – food producers – did not see what was coming. ‘Business’ was once a willing buyer and a willing seller – gradually it was replaced by a greedy buyer from a reluctant seller as the power of the supermarkets controlled all food prices – mass produced food production, high-tech, high-chem turned agri-culture into an industrial process.

Tony Blair, one of the worst Prime Ministers in Britain’s parliamentary history, promised to ‘break the arm-lock’ of the supermarkets. He never did of course – he never understood the countryside and I believe he regarded us all as straw-sucking bumpkins – but I am a bumpkin and proud of it – but in a multi-cultural society the rural culture of Britain deserves to be listened to and respected.

And where did this put wildlife? When the horse and early tractor ruled the land skylarks sang, brown hares experienced seasonal madness and sanity, and lapwings bred safely in virtually every field; there were cuckoos and turtle doves and swallows nested in most of the farm buildings. With chemicals, massive combine harvesters, land- drainage, efficiency, headage-payments – what a change!

There were other changes too – a wickedly cold winter – 1962-63; a dry scorching summer in 1976- ‘drought year’; stubble burning; Dutch Elm Disease – wildlife wipe-out – brown hare – gone; barn owl – gone; otter – gone; skylarks – gone; elm trees gone; cowslips- gone and much more. From childhood to manhood and beyond the wildlife and countryside around me changed. The landscape lost its warmth, its, scent, its sound – it’s heart.

It hit home to me on a bright sunny day. Something was missing; something was wrong. Then it dawned on me; I could not hear a lark – silence in the season of birdsong; an un-natural seasonal sound vacuum. I was appalled; depressed – it was a time to talk to friends. Leading a life that takes me against the general flow has advantages; it has meant that I am virtually unemployable in the normal job market of this free market economy. That has meant that I have been self-employed since the age of 26 – 51 years this year on the 5th of September. Being a second son on the farm it meant other things off the farm and in 1969 I put pen to paper and my first national article appeared in The Spectator

My journalism led to me meeting and interviewing some very interesting people – interesting to me that was. Some became very good friends; two especially, from very different backgrounds became very close; wildlife artist, countryman and articulate dyslexia sufferer, Gordon Beningfield, and writer, explorer, farmer, philosopher and writer Sir Laurens van der Post – one of Prince William’s God-parents. What a couple of opposites travelling in the same direction. Both wanted to join me and other local friends to take the message of the need for conservation and restoration into the general countryside – the whole of the British countryside should be regarded as ‘special, not just nature reserves.

With Gordon I went to The Lodge, the headquarters of the Royal Society for the Protection of Birds, to ask them to extend its interest in wildlife to the general countryside and farmland in particular – would they buy land and show farmers what to do instead of constantly criticising them? Several high-ups were present including the then Director, Ian Prestt, and John Parslow, a fine conservationist. Ian was not very helpful and appeared almost uninterested. Gordon was so frustrated he slammed his fist down on the table and said ‘You must do something’. Ian Prestt was startled more than impressed: ‘The future is nature reserves,’ he said and we were politely shown the door.

Well – on the 16th July 1993 the Countryside Restoration Trust was launched with no land, no members and no money. Now, 27 years later we have fourteen farms and smallholdings, plus an ‘associate-farm’, totalling about 2,500 acres. Our first farm, Lark Rise Farm in South Cambridgeshire has grown from 20 acres to over 450 acres. Our tenant, Tim Scott has been with us since 1993 and has performed a miracle of ‘wild farming’. We have not needed ‘rewilding’.  Tim has broken up the large fields of monoculture; instead  a wonderful mosaic of crops and habitats has been created. Once cultivated flood plains have been turned into hay meadows; large fields have been turned into several fields; there are grass margins, beetle banks; old spinneys; new hedges… The whole thing is astonishing – wonderful and Tim Scott has become a farmer who smiles, a man who produces good food and good wildlife. The barn owls are back; the brown hares are back; the grey partridges are back; the otter is back; the cowslips are back; 26 species of butterfly are back – I will not go on, but the list is longer and includes the skylark – singing again, halfway between heaven and earth.

Quality food and quality wildlife. Now we want to turn our cereals, our hay, our lamb, our fruit, into ‘Wildfarm’ food – that people can buy, taste and enjoy at dinner time. It is a way of farming that could transform the way we think of food, farming and wildlife. There are still problems of course – where are the cuckoos, the turtle doves and even the lapwings? Every year the number of swallows returning become fewer and fewer.

But we want to get better. We want more people to join us; nature and farming can co-exist; the living working countryside can be restored – if given the chance.

Robin’s background and the formation of the Countryside Restoration Trust can be read in greater detail in the enlarged 45th Anniversary Edition of “ The Decline of an English Village” re-issued by Quiller Publishing. 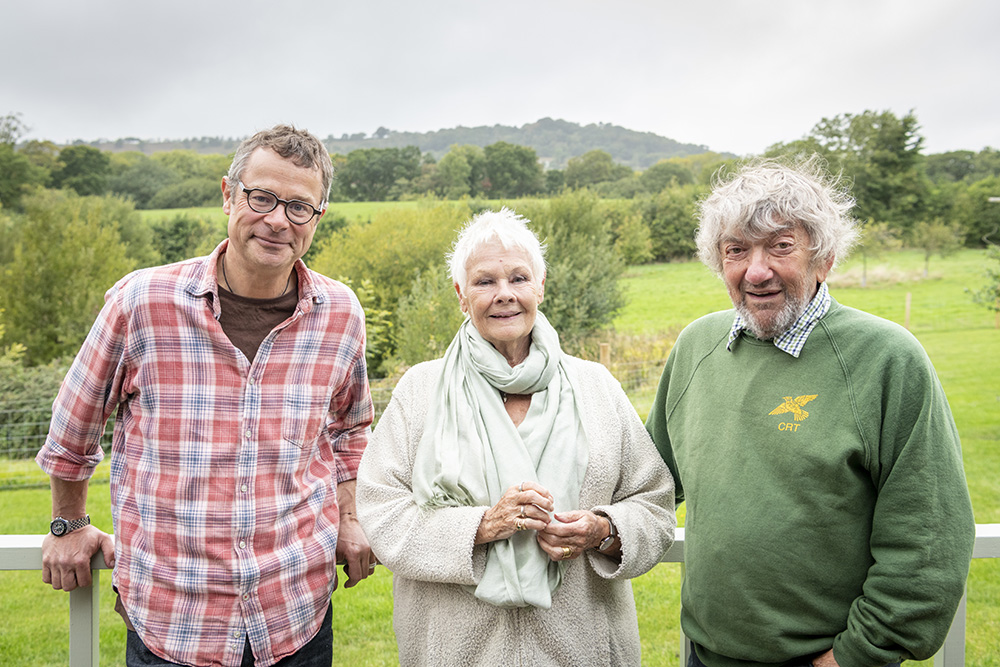