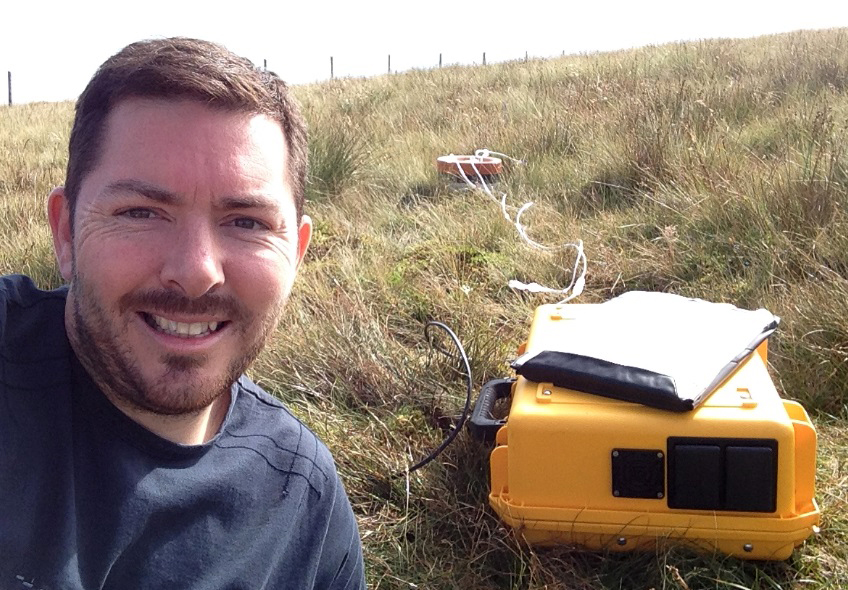 An opportunity for sustainable intensification of farmland to improve productivity and reduce environmental impact.

THE practice of agroforestry has been described as a ‘win-win’ approach to management, as it offers the opportunity for multifunctional land use. This can simultaneously benefit food and fuel production, environmental and biodiversity protection, and allow farms to adapt to or mitigate the effects of climate change.

It may sound like a system that would require a major shift in management style to adopt, but in reality it only requires an increase in the presence of in-field trees, both singularly or as part of a structure such as a shelter belt or buffer strip.

Agroforestry is a general term incorporating three specific agricultural approaches: silvo-arable (trees and crops), silvo-pastoral (trees and livestock) and agro-silvo-pastoral (trees with crops and livestock). Certain styles of agroforestry were once common in UK agriculture, such as orchard or fruit production systems, which also support livestock grazing, and as such can deliver dual production. No official definition of minimum tree cover exists beyond which a system is considered as agroforestry, therefore any farming landscape that aims to incorporate trees or woody vegetation could be considered to fall under this heading.

For Wales, the current Glastir Woodland Creation scheme will sponsor agroforestry creation on permanent pasture as long as tree-planting densities are 80 (scattered) trees per hectare, which gives some idea of scale.

Typically, agroforestry is associated with farm businesses in developing countries, particularly those in more arid, dry regions. However, there are also opportunities for farmers in temperate systems, such as here in the UK, to capitalise on this management approach; both directly and indirectly. For instance, it is currently expected that agricultural subsidy in the UK is likely to switch to a system which values the delivery of ‘public goods’, which are services provided by agriculture that benefit society. In this instance, components that are likely to play key roles will be the provision of biodiversity or carbon storage and sequestration. One way to increase the provision of these ecosystem services on farms is to increase the presence of trees and habitat opportunities. Agroforestry can improve production potential while increasing the provision of woody biomass for carbon sequestration and habitat provision for biodiversity. Furthermore, systems that utilise this woody biomass for the production of sustainable fuel, to be sold or utilised through Combined Heat and Power (CHP) within farm-systems, the production of timber, or which aim to plant fruit bearing tree species to offer alternative crops, will add an additional opportunity or advantage to farm businesses.

Current predictions of environmental change indicate that farming practices in the UK are going to have to change, both to adapt to the expected shifts in climate, but also to refine practices to reduce potential environmental impact from modern agricultural approaches. Agroforestry may offer an alternative management system, which meets the requirements for reduced environmental impact, whilst improving the potential for farm business productivity. 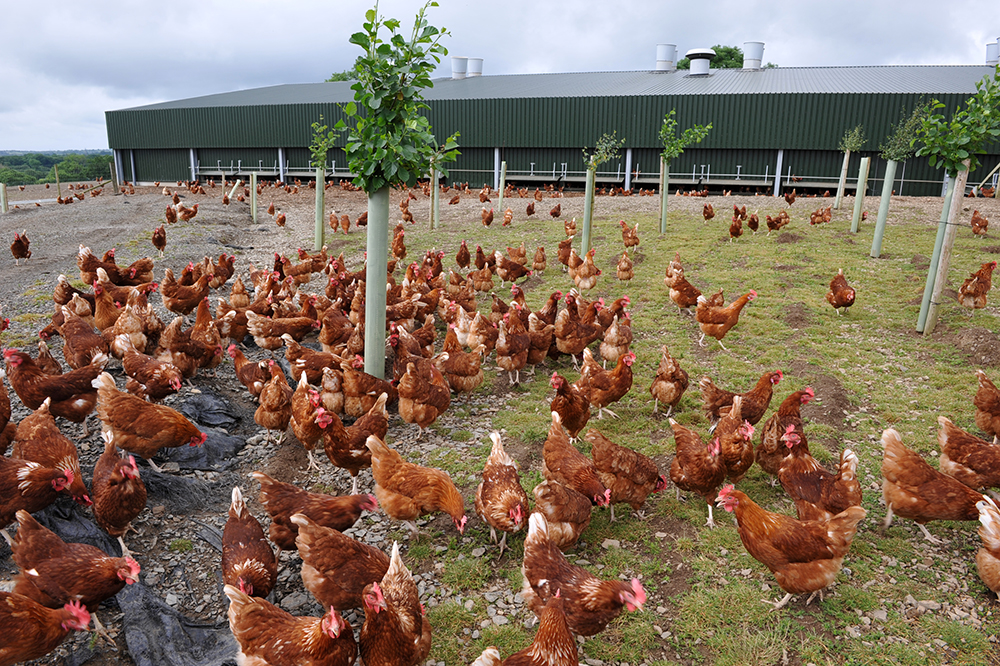 The benefits of agroforestry are varied: more favourable microclimates, enhanced biodiversity, reduced wind velocity, improved soil fertility, diversification of production, increased resource-use efficiency, reduced nutrient runoff, and decreased levels of soil erosion. In terms of livestock production, the presence of trees and shelterbelts offers shade and shelter for livestock, which can reduce the energy requirement for keeping cool or keeping warm, which in turn reduces feed input costs and increases feed conversion rates and weight gain. Reducing the effects of wind chill (and thus hypothermia) can also increase lamb survival rates, particularly in the early stages after birth. The presence of trees also increases the rate of water infiltration to soil, which can reduce standing water and consequently incidence of lameness and liver fluke in livestock. 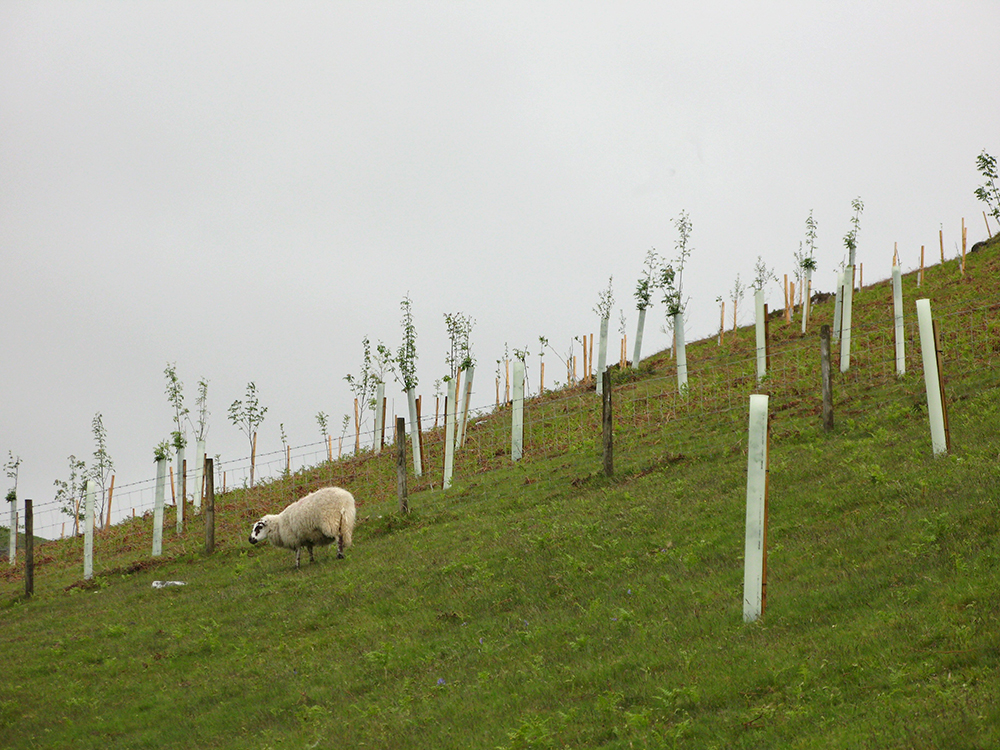 Certain tree species may also be helpful in terms of ‘self-medication’, where animals can forage on material with beneficial properties. One example of this is willow, which has anti-helminthic properties. The degree of benefit that this may offer however requires further research to ascertain. Monogastric animals, such as pigs and chickens, also benefit from tree presence. This is due in part to the fact that these species are descended from forest dwelling creatures, such as wild boar in the case of domestic pigs. The presence of trees encourages positive behavioural traits in these species, reducing negative social interactions, such as inter-animal aggression.

In terms of land management, the use of tree planting alongside waterways can reduce the impact of diffuse pollution and soil erosion from farmland, limiting environmental impact and economic loss. Riparian buffer strips are corridors of vegetation which flank the sides of freshwater systems such as rivers and streams and provide a barrier between field systems and freshwater systems. Vegetation buffer strips are a common component of strategies that aim to reduce the transfer of sediment, nutrients, and pesticides into freshwater ecosystems. Using woody vegetation as buffer strips can reduce the potential for nutrient transfer into freshwater systems through direct interception, uptake and utilisation of nutrients, or through supporting environmental conditions which promote exclusion through chemical transformations, such as denitrification. Large woody vegetation buffer strips can also act to stabilise riverbanks, both by reducing the potential for river erosion directly and by restricting livestock access, which limits trampling damage.

In-field buffer strips can also be used to intercept nutrients, which are being leached away from crop available zones, and will recycle these back to crop available areas by returning them as leaf litter. This influence can be valuable; leaf litter alone has been suggested to contribute an additional 7 Kg of nitrogen per hectare per year.

By virtue of sharing the same space, some competition for resources such as light and nutrients will occur between trees and grass or other crops.  However, the associated benefits can outweigh this problem as agroforestry systems have comparable or larger productivity potentials than typical (treeless) systems, as a result of gains from intercropping and directly increased growth.

The high crop productivity rates associated with agroforestry are the result of complementarity between species. For instance, competition is limited because different species target resources from different parts of the ecosystem; i.e. tree roots are larger and go deeper than crop roots, and therefore target nutrients and water from sources that are unavailable to crop species. These resources are then recycled back to other components of the system via leaf fall or fine root turnover. Furthermore, the additional opportunities for refuge and forage that tree presence offers can also result in greater numbers of predatory species, such as hover flies, which can reduce or regulate the number of crop pests. A fact which will become increasingly important in the future as warmer conditions are expected to result in larger populations of pest species.

One of the principal benefits of the incorporation of trees into grassland or crop systems is the reduction in wind speed. Wind action can reduce growth in plants through temperature reduction, physical damage, or through desiccation, and can damage and erode soil. The creation of microclimates in the leeward side of shelterbelts is particularly favourable for plant growth, as the additional air and soil temperature can extend the growing season resulting in gains for growth and productivity. During hotter periods, the presence of trees and the effect of shade may act to reduce water loss from soil by limiting evapotranspiration rates from plants.

This effect must be balanced against the potential for increased competition for light. Tree density has a strong influence on productivity potential within agroforestry systems, through reduced yield from excessive shading. However, at moderate tree densities, the reduction of available light will not necessarily reduce the potential for growth, as plants will compensate for this added stress by altering their morphology and biochemistry. Studies considering this effect have demonstrated increased chlorophyll production per leaf, the development of fewer but larger leaves, and longer stems, petioles, and internodes; plant physical characteristics which would be considered favourable in terms of growth. Tree planting densities should therefore not exceed 200 stems per hectare for maximum benefit.

The principles of agroforestry offer a realistic scenario for a more integrated approach to future farm management, which can maintain or improve production potential, whilst also safeguarding farms against potential future environmental and climate change. This system can offer multiple benefits in terms of production but requires only minimal input to instigate change. In addition, once the trees are planted, the benefits associated with this approach will continue to grow year on year.

Fundamentally, there is an obligation currently to modify our land use approaches to reduce the impact to ecosystems and organisms of food production and related industries. Tree cover in the UK currently stands at around 12%. Across Europe the average is nearer 38%. This fact highlights a problem with UK land management. Increasing the presence of trees and woody biomass within our landscapes, particularly within agro-ecosystems, would benefit wildlife and biodiversity, help food production systems adapt to and mitigate the effects of climate change, and improve the potential of food production systems. Against this standard, the description of this approach as a ‘win-win’ seems entirely justified.